In the summer of 2015, the rescue of a stranded young transient Killer Whale along the North Coast of British Columbia made national and international headlines. I was leading a team of researchers and members of the Gitga’at First Nation of Hartley Bay in the rescue effort at the time to help this young whale who got stuck on a rock while hunting harbour seals with the rest of its pod.

It was a very touching and emotional experience for everybody involved. Seeing a member of the ocean’s top predator so vulnerable and helpless on land was very sad. But something

needed to be done to help this young Orca survive several hours of ordeal. The tide was ebbing at the time we found the whale, so we knew it would take more than six hours before the tide would be high enough for the whale to get off the rock by itself. The most important thing for us to do was to keep the body of the whale as cold and wet as possible. Blankets were used to cover the entire body and we used buckets and a small hand-pump to continuously pour saltwater over the body.

When I first approached the whale to assess its condition, you could feel its stress. The

breathing was very heavy. I tried to be as calm and slow moving as possible, sat down and

looked the whale in its eye. I told him that we were here to help and everything will be

saltwater over the whale’s hot black skin, I think he understood that I was not a threat. The

was attended to by these small two-legged creatures. His mother and the rest of his family initially stayed close to the tiny islet the whale was stuck on, but after about an hour they wandered off in the distance, though not completely out of sight.

The stranded whale would call once in a while for its family, which was heartbreaking to listen

to, but it kept us going working hard to make sure that this whale will be strong enough on the next high tide to swim free and reunite with his family. The whale must have been in serious discomfort at the very least, because his immense body weight was putting a lot of pressure on his internal organs on land.

Then, about 8 hours later the tide was high enough to reach the whale and we could stop our work. Now it was up to the whale to free itself. We packed our gear and disappeared from the immediate scene, watching from a cliff nearby on what was to happen next. What was to follow was a strong lesson in patience. Even though the whale was already afloat for more then 30 minutes, he was still patiently negotiating which way to turn in order to safely get away. A bit forward at times, then back to it original position. But then, with a strong push of its tail fluke more than half of the body was finally in deeper water and it was time to run!!! The whale took one more breath followed by a deep dive and he was gone!!! He took a five minute dive and was on his way to his family who was waiting in the distance all this time. We were all left standing on this rock, exhausted but absolutely happy for this young whale.

In the weeks to follow we were hoping to see the whale again with his family, just to know that everything is ok. In fact, it took two years for the first confirmed sighting of the group, by a research group from DFO, who saw the pod in 2017 in Whale Channel. That was awesome

news at the time and very reassuring that our efforts paid off. 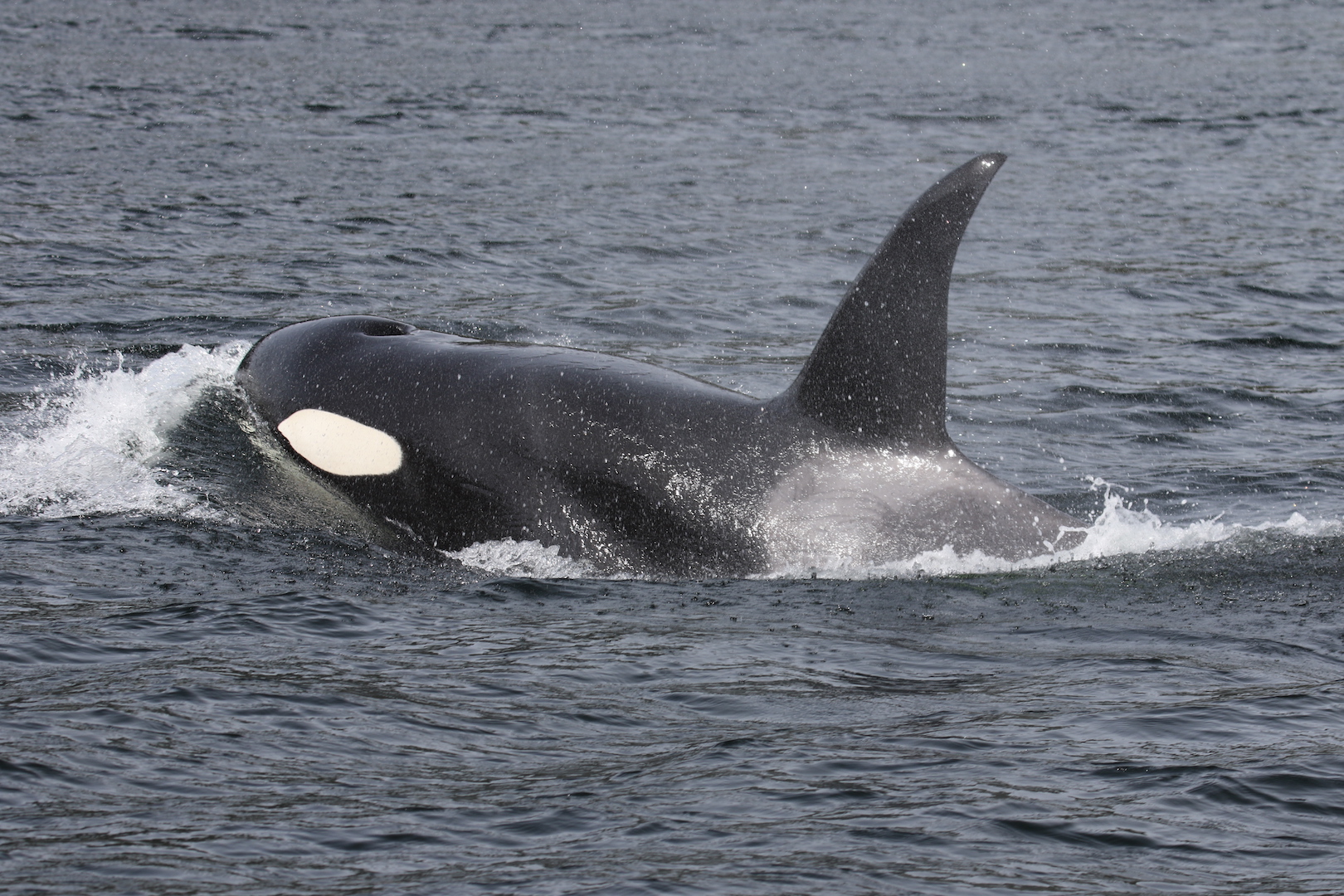 I am in Hartley Bay, it is just about lunch time, when I receive a report on the VHF from friend Marven Robinson about Killer Whales southbound in Douglas Channel, close to Hartley Bay. No time was wasted, and my wife Christa and I headed out in our boat, to try to identify the group. Knowing that the group of whales were heading towards us, we did not travel far but rather just scanned the waters of Douglas Channel outside of the village for signs of blows and dorsal fins. Thirty minutes passed and we did not see any whales. A bit frustrated we turned back towards Hartley Bay slowly travelling back home, wondering how we could have missed them. All of a sudden we saw their blows!! Yes, finally I thought!!!

We caught up to them in a narrow passage and enjoyed their company for about 20minutes,

busy taking pictures for research ID’s. I initially did not recognize the group but thought that the matriarch of the group looked familiar.

matriarch I realized that we just had a re-sighting of the family of the stranded transient Orca,

It was no wonder that I was not able to realize who we had at first, because there were two

new calves born into the pod recently, and the stranded whale is now a sprouting male, his

dorsal fin growing fast on his way to adulthood, which means the appearance of the pod had

drastically changed over the last four years. He is now 13-years old and continues to be a vital and important member of his pod. Tears started to run down my face as memories of the rescue came back to me. It was a confirmation, a closure to the incident of the rescue.

The strong family ties of the Killer whales on this coast have always fascinated me and were the reason that I left my family and home country, 25-years ago.

I can truly say that after more than two decades of studying them in the wild in one of the most remote part of the BC northwest, killer whales have a lot to teach us. Most importantly, they are a stunning example of living a life without fear and live in the closest possible family ties.

They live in a matriarch society, where a mother and her offspring form a unit that will last a

lifetime. The stranded young male will continue to grow into a healthy mature whale, while

spending every day of his life together with his mother and all other family members.

Together with my beautiful family, I will continue to dedicate my life to the different whale

species within the territory of the Gitga’at First Nation, trying to make their habitat a better

place to live, and who knows perhaps I will see T069A2 again soon.

Hermann Meuter is the executive director of the ‘Pacific Whale Society’, a small non-profit

organization based on Gil Island, BC. He is also the “Climate Action Coordinator’ for the Gitga’at First Nation in Hartley Bay, BC.

He can be reached via e-mail at: whalepoint@outlook.com

LET THE WHALE COME TO YOU

WHAT LIES BENEATH THE SURFACE